Register as a new user

Register
Login / Register as a new user
SIGN IN:

Register as a new user

Dani Pedrosa is a three time World Champion. He won the 125cc class in 2003 as well as the 2004 and 2005 250cc World Title. In spite of never being a MotoGP world champion, Pedrosa won races in twelve consecutive seasons in the championship (2006–2017). He has also finished as championship runner-up on three occasions (2007, 2010 and 2012). Pedrosa spent 13 seasons riding for The Repsol Honda team, 2006 until the end of 2018. In a televised press announcement, he confirmed his retirement from MotoGP competition on 12 July 2018. In late October of that same year, it was confirmed that Pedrosa had signed for the KTM MotoGP team as a development test rider for 2019 and 2020, ending his long association with Honda. Our latest release features moments personally selected by Dani Pedrosa as his most memorable during his racing career. From his 1st World Title to his last MotoGP race victory. Dani Pedrosa has personally signed this special release which is limited to only 50 worldwide. Each piece is backed by an Autographed Collectables 100% Guarantee of Authenticity which includes the signing date, location, edition size as well as a photo from the signing session.

Despite the external situations experienced, the shipments and returns are working correctly and with the relevant health standards. If you have any further questions please contact our customer service. 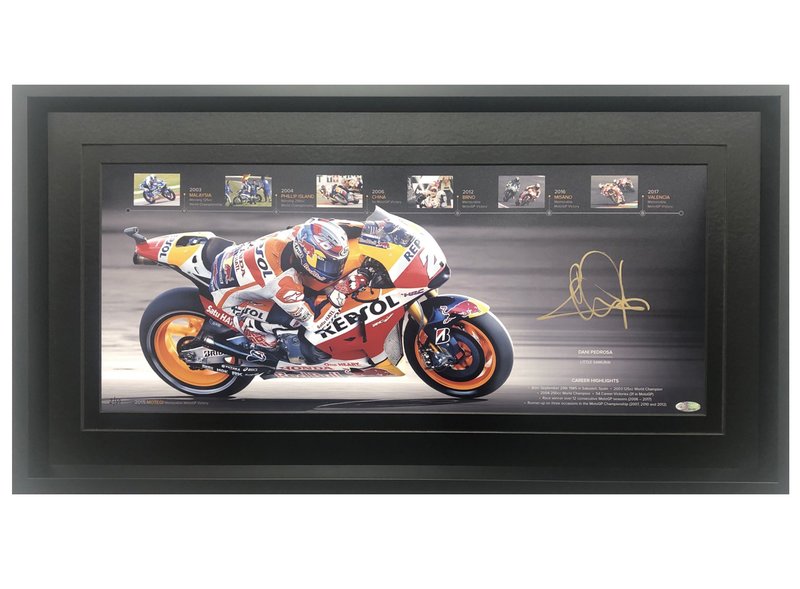 >First select a size<
ATTENTION: For the shipment of this product it can take up to 21 days more.
ATTENTION: This product will also be shipped separately, as it is sent by the supplier directly from their warehouse.
Add to wish listShare
You may also like
Size chart